Certificates on the day were awarded by The Rt. Hon The Lord Mayor, Alderman William Russell, with the customary handshake replaced by touching elbows.

The Master Plumber Certificate is a prestigious award, only attained by the highest skilled members of the plumbing and heating industry. First introduced in 2001 through a partnership between City & Guilds, the Worshipful Company of Plumbers and the CIPHE, the scheme has grown to include a wide range of London Livery Companies and Professional Bodies. This year’s event was coordinated by the LCSC and saw Apprentice, Journeyman and Master Awards presented to over 50 representatives of trades, ranging from Furniture Makers to Merchant Taylors, and Constructors to Joiners & Ceilers.

The ceremony itself recalls the full history of the trades and recognises each Award recipient for their craft, by which they must accept a ‘Charge’. The charge accepted by Keith, Andrew and James, was read out on the day by Dr Peter Rumley, the Master of the Worshipful Company of Plumbers.

Tim Sainty, Membership Director CIPHE was on hand to congratulate the newly designated Master Plumbers, “It’s always a real pleasure to see our members achieve Master Plumber status and be recognised as elite representatives of the trade. Keith, Andrew and James have worked incredibly hard throughout their careers and are the embodiment of what it means to be a Master Plumber. They not only possess the knowledge and skill demanded at that level, but are dedicated to the industry, lifelong learning and nurturing the next generation of engineers.”

The CIPHE offers Certificates at Master, Journeyman and Apprentice levels. To find out more information about the plumbing awards, please contact the Membership Department on 01708 463116 or email membership@ciphe.org.uk 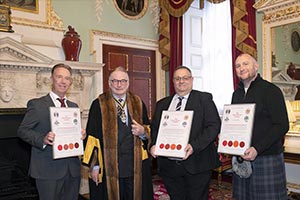 Keith Robert Walklate EngTech MCIPHE RP
Keith has over 40 years practical experience, having gained his City & Guilds Advanced Craft Certificate in Plumbing in 1978 at Hammersmith & West London College.
He is highly skilled in leadwork, lead burning, copper sheet work and cast iron drainage and has been a sole trader for over 30 years, during which time he has mentored many apprentices.
Keith joined the CIPHE in 1987 and is a Member and Registered Plumber and is also registered with Engineering Council at Engineering Technician level.

Andrew John Mensley EngTech MCIPHE RP
Andrew served an indentured apprenticeship and qualified for his City & Guilds Advanced Craft Certificate in Plumbing in 1979 after studying at Hinckley College of Further Education.
He was the first person to achieve a silver medal for the International Skills Olympics 1978 in Busan, South Korea and his career has developed from Plumbing and Heating Engineer to Building Services Specialist. Andrew has also been involved in education and training, from lecturer to being Chairman of the Education & Training Section of the APHC who advised and assisted in the development of NVQs.
Andrew joined the CIPHE in 2008 and is a Member and Registered Plumber and registered as Engineering Technician with Engineering Council.

James G.S. Hendry EngTech FCIPHE RP
James has over 25 years varied experience after gaining his SVQ Level 3 in Plumbing. He spent 2 years as a plumbing lecturer in Namibia teaching first year apprentices. In 2010 he became a part-time firefighter for Tayside Fire and Rescue.  In 2012 James took sole charge of the daily running of Halley 6 Research Station in Antarctica, a base 2,500 miles from civilisation and stranded for 9 months of the year due to the Antarctic winter with temperatures as low as -67oC.
James returned to Scotland in 2014 where he is Plumbing Lecturer at Inverness College teaching first year plumbing apprentices to SVQ Level 2.
James joined the CIPHE in 2018 as a Fellow and Registered Plumber.  He is also registered with Engineering Council as an Engineering Technician.