No-deal Brexit could cost family-owned insulation manufacturer up to £85,000 per year

Family owned insulation manufacturer, SuperFOIL Insulation estimates that a no-deal Brexit could cost it £45,000 to £85,000+ per year.

SuperFOIL’s estimate is based on a report published by HM Treasury at the end of 2018 which calculated that a no-deal Brexit could make the UK’s economy 9.3 percent smaller over 15 years.

The analysis also shows that the impact for manufacturers in a no-deal scenario would be the equivalent to, on average, 9 to 17 percent of the value of EU trade compared to today’s arrangements.

SuperFOIL, which employs 16 people near Tuxford in Nottinghamshire and sells 20% of its multi-foil insulation in the EU is making its calculations public in the hope that it will help people to better understand the potential consequences of a no-deal Brexit.

Managing director, William Bown said: “Whenever politicians discuss the consequences of the different deals, it’s hard to put things in context and see how it would affect individual businesses and communities. We’re a small, family-run business making a high-performance, innovative product and exporting our insulation to the EU forms a big part of our income.

“Any additional costs we incur or anything that would make us less competitive in the European market would have a direct impact on our profits. That means we’d have to either increase our prices and pass the cost on to our customers or we’d have to make significant savings. If the consequences of a no-deal are as bad as the Treasury forecasts, that means we probably won’t be able to take on any new employees and we might even have to let people go - it’s as serious as that. 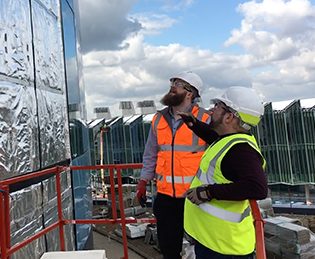 “I was born in Sheffield and I’ve lived in Nottinghamshire since I was two but I’ve always considered myself a European and being able to trade fairly and easily with developers in the EU has played a major part in the success of our business: It’s helped us to grow and to employ more people locally. I just want people to know how much this might cost our business and how this would limit our ability to create jobs in future.”

The government’s predictions that have been used for this estimate are based on a no deal situation in which:

Other scenarios that have been forecast by the Treasury include a free trade agreement between the EU and UK, a European Economic Area-type arrangement and Theresa May’s ‘Chequers Agreement’ would all have fewer negative consequences for SuperFOIL Insulation and other manufacturers.

Under the government’s forecasts, it’s estimated that the Prime Ministers’ ‘Chequers Deal’, on which the present withdrawal agreement is based, would cost SuperFOIL Insulation £5,000-£20,000+ p.a.

Other costs which could affect SuperFOIL and which haven’t been modelled in the government’s predictions include the impact that a fall in value of the Pound might have on importers. Last month, The Bank of England predicted that a disorderly no-deal Brexit could lead to the Pound depreciating by 25% which would significantly impact purchasing power overseas.

SuperFOIL manufactures and supplies high-performance insulation for commercial and residential developments, new-builds and renovations. Because the UK doesn’t produce many of the raw materials needed to manufacture insulation products, SuperFOIL and almost every other insulation manufacturer in the country import material from outside of the UK from a global market. For example, one of the core chemicals in PIR board is produced in only two factories worldwide while the largest producers of aluminium for insulation are China and Australia. If the purchasing power of the pound decreases, the materials cost for these materials will also increase.

Although potential free trade deals might decrease trade tariffs on these goods in future, William Bown said this would do little to offset the other additional costs: “If Britain is able to strike a free trade agreement with these countries, then yes, my import costs could decrease by 3.5-5% if tariffs are removed. That would be a saving, but it doesn’t add up to the money we’d be losing on our exports to the EU and I’m not convinced it would make up for loss of purchasing power we might experience.

“Of course, free trade agreements work both ways, so in this scenario, I would also be able to sell my finished product back to the corresponding markets. The problem is that at the moment, these aren’t viable markets for us. Exports outside of the EU currently amount to less than 1% of SuperFOILs sales with little demand, large cultural differences and a completely different set of regulations and customer expectations to deal with.

“On top of this is the issue of transport which is unpredictable, expensive and slow, adding anything from 20 days onto delivery time. Shipping goods halfway around the world would also increase our carbon footprint, which wouldn’t be a good look for a company that helps customers cut theirs!

“Another argument in support of a no-deal Brexit is that British companies would be more inclined to trade with other British companies and that we’d all be able to buy from and sell to each other rather than competing on a global stage. Honestly, I’d love to be able to manufacture and source every part of my multi-foil insulation from within the UK, but it currently isn’t feasible.

“In all, I’m convinced that Brexit will be bad for us and bad for our whole industry.”

SuperFOIL is the UK’s leading multi foil insulation supplier to the construction industry. Part of the Boulder Developments Group, it supplies roof, wall and floor insulation to building firms, architects, public and private sector and self-build projects. It was awarded BBA approval in 2018 for its multi foil products.