The UK Plumber of the Year 2019 competition (@UKPOTY), launched by JT, Bristan and Wolseley, has revealed the ten finalists shortlisted for the competition. Industry members and supporters are encouraged to vote for their favourite nominee.

Watersafe, the official judging partner of the competition, was tasked with narrowing down entries from across the country to just ten finalists. The next stage of the competition is the ‘Vote for me’ round, where the individual plumbers will be narrowed down by the public to the final five.

The final ten, in alphabetical order, are:

Marking five years since the competition began, UK Plumber of the Year has continued to call together the nation’s plumbers in a bid to find Britain’s finest. The competition is designed to reward and recognise the remarkable talents within the UK’s plumbing industry and ask entrants to demonstrate their plumbing, service and business skills. 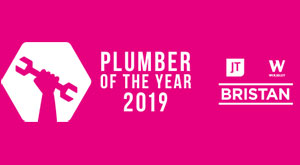 John Schofield, sales and marketing director at JT, says: “Now in the fifth year of the competition, judging is going be closer than ever – I really don’t envy our friends at Watersafe! Last year’s winner Steve has demonstrated just how much winning this competition can do for your business, and I’m so excited to see which deserving winner is crowned this year. Best of luck to all the entrants!”

Biographical information on the ten finalists and how to vote features on www.ukplumberoftheyear.com.

Voting is open until August 22nd and the top five will be revealed on August 26th.