Installers have been given a ground-breaking new way to specify designer radiators thanks to the launch of an industry-first augmented reality app by Barlo Radiators.

The newly launched Barlo Designer Radiator app, gives consumers the opportunity to virtually ‘try before they buy’ – using advanced augmented reality (AR) technology to help them visualise how different designer radiators would appear, in situ, in their home. The app has been created specifically with installers in mind, presenting them with a brand-new sales tool to help them add value when communicating with customers.

As the industry’s first AR radiator app, it gives installers and homeowners an unprecedented, no-obligation look into how designer radiators can transform a specific space. Through its simple and intuitive design, installers can access Barlo’s designer radiator range at the touch of a button, and show customers how multiple styles, sizes and colours could impact on the aesthetic of their rooms.

Richard Wheeler, Product Strategy Manager at Barlo Radiators, said: “Designer radiators are an easy and cost-effective way to inject colour, style and character to any space, and here at Barlo we’re seeing a growing trend in consumers looking into designer heating options for their homes. As the industry becomes more design-focused, it’s vital that installers and their customers choose products that not only look impressive, but deliver on functionality and performance too – and our Barlo Designer Radiator app has been created to help them do just that. 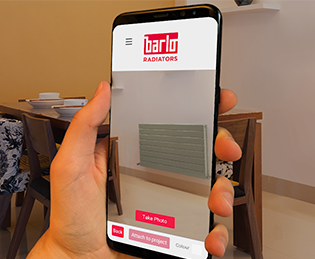 “We want to give installers and end users the ability to visualise what feature radiator styles – such as multi-column or tube emitters – would look like in a particular setting in any room of the house, confident in the knowledge that by choosing Barlo they’re also getting the best heat outputs on the market. Through the app, users can browse our designer radiator range and use their smartphone’s camera to see exactly how specific models would look on the wall in front of them. They can even try different sizes and colours in an instant, making the app the ideal sales tool for installers – whether they’re specifying for a direct designer replacement or offering an upgrade from a standard panel emitter.”

Available for download on both Android and iOS devices, the Barlo Designer Radiator app gives installers easy access to the Barlo Design portfolio, including its popular Slieve, Adagio, Forza and Plaza designs. Users can simply point their device’s camera at their chosen wall space and the app will use pioneering AR functionality to display a fully scaled, 3D mounted image of their selected Barlo radiator. They can then choose different designs, sizes and colours, before saving images and sharing them directly via the app.

As well as creating AR visuals, installers can use the app to send quotes to customers quickly and efficiently with the ability to include their business’s logo. It also features a heat loss calculator (allowing installers to quickly calculate a room’s BTU requirement), as well as a store locator, with information on where they can find their nearest Barlo radiator stockist.

Richard Wheeler added: “From its conception through to its launch, installers have been at the heart of its design. We carried out national workshops to understand the kinds of challenges installers are facing when specifying designer radiators, and our research has been fed directly into the app at every stage of its development. We know that one of the biggest hurdles installers face is pricing and quoting jobs in a timely manner, and we understand that when it comes to closing a sale, time is of the essence. As well as giving a true representation of how a designer radiator will look, our Barlo Designer Radiator app is designed to help installers quote accurately, efficiently and professionally, increasing their chances of closing a sale.”

David Relihan, Commercial Director at Barlo Radiators, concluded: “As a forward-thinking company, home to the best-performing radiators on the market, the launch of our app is just another example of our commitment to staying at the forefront of the industry. As the popularity of designer radiators continues to soar, manufacturers have a responsibility to support installers in responding to rising demand effectively – fitting emitters that tick the right boxes aesthetically, but that also deliver on warmth and efficiency. Using the new Barlo Designer Radiator app, installers and their customers can rest assured they’re choosing a radiator brand that does both.”

The Barlo Designer Radiator app is now live on the App Store and Google Play store. Installers can request a starter pack through the app (providing access to a Barlo AR wall marker tool for enhanced sizing accuracy) or by contacting Barlo Radiators on 01633 657 000 or by visiting barlo.co.uk/app.