The up and coming North East entrepreneur was named the Institute of Directors (IoD) North East Young Director of the Year at the annual IoD Yorkshire & North East awards.

Mr Savage, 36, launched Flame Heating Spares with a single branch in Gateshead, in 2011 and the company now operates six branches across the North East and employees more than 20 people. He started his career as a warehousing apprentice for a national plumbing merchant before working his way up to become an area manager, prior to establishing Flame with his business partner and sales director, Gary Riseborough. 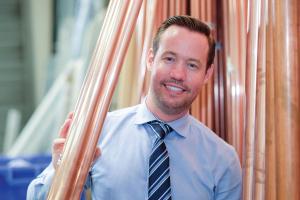 John said: “I am delighted and overwhelmed to have won this award, which came as a very pleasant surprise. When first starting out in business, I could never have imagined that the company would be in this position so quickly, and it really is a testament to our staff who have all bought into the process and contributed to our continued growth.

“It is an honour to be named the region’s Young Director of the Year by the IoD and to be recognised in the business community in this way, which is one of my greatest personal and professional achievements. I am now looking forward to October and representing the region in the national awards.”