North East cancer charity to be supported at Flame's racenight

A North East cancer charity is set for a place in the winning enclosure as Flame Heating Group prepares for its fourth annual racenight.

Saras Hope Foundation is being supported by the heating and plumbing merchant as Flame’s nominated charity for 2019, which will host its ‘Flame The Heat Is On Racenight’ at Newcastle Racecourse on 20 September.

Over the course of the year Flame has hosted several other fundraising events in support of Saras Hope Foundation, including a charity football tournament held in May.

John Savage, Managing Director of Flame Heating Group, said: “We are confident we can build on our fundraising success from last year and support Saras Hope Foundation with a significant donation. It is a fantastic North East charity that we are proud to support. The racenight forms a major part of our social calendar each year and we are looking forward to hosting another successful event this September.”

Established in 2007 by Ged and Julie Hoburn, Saras Hope Foundation offers respite for children and young people with cancer and their families, which includes providing fully funded holidays to create lasting memories with loved ones. The charity was set up by the pair after their daughter, Sara, tragically passed away in 2001 at the age of 16, following a two-year battle with a rare and aggressive form of colon cancer. 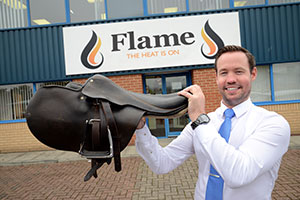 Carol Bennett, Fundraising Manager of Saras Hope Foundation, said: "Saras Hope Foundation provides holiday breaks for children living with cancer and their families. We are delighted to have been given the opportunity to be in partnership with John and his team at Flame. As a small, local charity, corporate support is vital for Sara’s Hope to continue their work within the communities around them.”

For further information about the racenight or to book your tickets, contact Imke Robson on 03333 05 3333 or you can email imke@flamegroup.com