In response to increasing consumer interest in the Internet of Things (IoT), Systemlink, a Dublin-based manufacturer of heating systems, has teamed up with mSemicon, a developer of customised engineering hardware, and mobile application platform provider, Red Hat Mobile, to develop a domestic hot water system with additional sensors and relays, that can be controlled via a smartphone app.

Systemlink's patent-pending AquaEko system fills the cylinder from the top with hot water, which allows just the required volume of hot water to be drawn off as it is needed.  Systemlink wanted to provide consumers with greater feedback and control over their domestic hot water use, to help them to manage their electricity, gas and water consumption.

An HTML5 app was developed, enabling consumers to remotely control their home heating and hot water system from their smartphones and monitor their usage over the year. 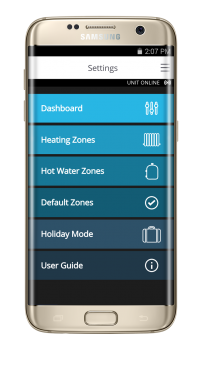 Systemlink also specified controllers manufactured by mSemicon, a company that develops customised engineering hardware that is used with IoT and renewable energy devices. To enable the app to work with the controller, Red Hat created a custom cloud API to integrate with mSemicon’s hardware.

Systemlink uses the LoRa wireless network to transmit data to and from its AquaEko device. “Two of the biggest enemies of wireless signals are concrete and water,” explains Systemlink director, Terry Madigan. “We found that LoRa is a good low power network, which provides our IoT products with greater range.” 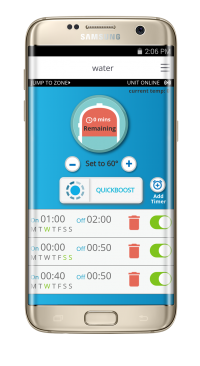 “The Systemlink AquaEko app shows the volume of domestic hot water generated, displayed in pictorial form, showing the numbers of baths or showers that are available to use, rather than litres that have been heated. This makes the app more intuitive and helps customers to control the amount of energy they use to heat their domestic hot water,” says Madigan.

The Systemlink AquaEko system already has a frost setting that automatically turns on the heating so that the home temperature should never fall below 5°C. In future, Systemlink may integrate with databases such as the local weather report to enable returning travellers to be alerted if there is a cold snap. “We are considering including intelligent learning on the system so that it can adjust to local weather conditions,” enthuses Madigan.

Now that the Systemlink app has been developed, Madigan believes that the IoT benefits could be applied to other domestic devices: “Essentially, IoT is a remote control switch. The relays could be expanded to control other household items such as electric blinds and lighting, using the Red Hat mobile platform,” Madigan believes.