During this period, Flame, which was established in 2011, doubled the number of branches it operates to six, following openings in Sunderland, Stockton and Ashington, as well as re-located to a new, larger head office in Gateshead. The company also has outlets in Durham and South Shields.

Over the course of the next five years, John Savage, managing director of Flame Heating Spares, is planning on taking this number to 20 and also doubling his workforce to more than 40 employees.

Mr Savage said: “It has been another successful year for Flame, buoyed by an increase in demand amongst our customers and installers for our services and 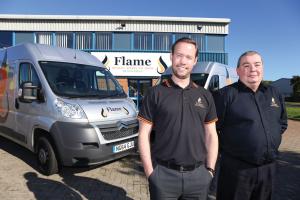 ever-increasing product range. The industry as a whole has continued to thrive and together with the addition of another three branches over the last 12 months, we are now able to serve even more areas.

“Our ambitious five year plan is just the beginning for the company and there is a lot of positivity ahead. We have grown massively in the space of five years, more than I ever could have imagined, and the plan is to continue this trend with further launches and investing in our workforce and infrastructure.”

John was recently recognised by the Institute of Directors (IoD) as its North East Young Director of the Year.

He added: “For me, on both a personal and business level, it has been one of the greatest periods in my life. To win such a prestigious award was unexpected and a real honour, and to see the company in such a healthy position is equally humbling. I am now looking ahead to the future, which is very promising.”